I collect rocks. When I walk along our country road before long I notice a lovely stone. I stop
and pick it up, turn it over in my hand and admire color, size, and shape then put it back in its spot. The other day after I walked away leaving the beautiful little pebble behind I suddenly thought, "I could save that one for my collection."

When I turned around and went back, carefully looking for my triangular bit of quartz it was gone.
So I chose another one and clasped it in my hand until I got home. I washed it and found a safe
place to display it.

(There is another story about finding a tiny piece of petrified wood written April 11, 2009.
Krysta and I tried to link it to this post with no success.)

Another fun thing to do is watch the clouds and imagine cloud animals floating overhead. This can be especially helpful on road trips across Montana. The sky is a beautiful blue and huge, puffy white clouds are constantly changing shapes. Elephants march across in front of the car then turn into other zoo animals before your eyes. Montana is our Big Sky Country.

Have fun exploring!
Posted by little-shack-in-the-boondocks at 8:04 PM No comments: 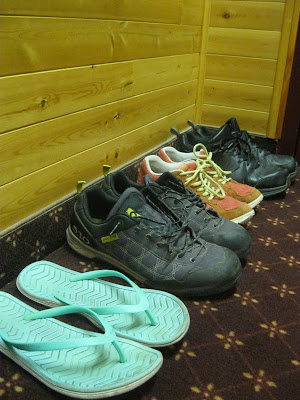 Have you ever traveled over a road so many times that eventually it seems ingrained in your
mind? For the first twelve years of my life I rode with my family back and forth on Hwy 11
from Roseau to International Falls more times than could be counted . . . with many stops in
between. Our cousins lived between Roseau and Warroad . We drove to Roosevelt to visit grandparents. Our school was in Williams. The post office was in Graceton and our church was
there as well. We shopped in Baudette, and stopped at Clementson to see those falls on our way
to visit friends in Loman and International Falls.

Another way to remember a road in a special way is to listen to a book on cd while traveling.
One summer we drove on Hwy 56 on the western edge of Montana listening to A Wrinkle in Time
or one of its sequels by Madeleine L'Engle. I can still see the mountains, trees and the river winding beside the road.

The most recent adventure was traveling on Hwy 17 from Sault Sainte Marie to Espanola, Ontario, Canada. It was dark. It was raining. Sometimes the rain was coming fast and furious and we couldn't see the road. Of all the stretches of road to drive at night in the pouring rain and at the same time listen to A Series of Unfortunate Events by Daniel Handler, better known by his pen name, Lemony Snicket, this road seemed made for the occasion. Some day I would like to drive on it when the sun shines and go a tad slower.

When we got to Espanola we found a motel that was open and had vacancies. After we hauled in the luggage and got comfortable I asked Krysta to take a picture of our shoes. She thought it was a weird thing to do, but she took the picture with rumblings about, "You really need to get your own camera."

It seemed even more strange to Krysta to move that picture to my blog at 11:30 Saturday night. We weren't really going to post it, just get it ready for a blog post at a later date.

That's the mystery. I thought I simply saved the picture. Instead I touched the button to publish it. Sorry to keep you in suspense.
Posted by little-shack-in-the-boondocks at 11:37 PM No comments: